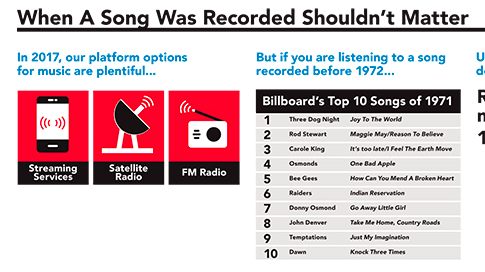 The variety of ways a music lover is able to listen to music in 2017 is much different than how someone could hear a song in 1997. With the influx of streaming services such as Spotify, Tidal, SoundCloud, AppleMusic, and commercial free satellite radio like Sirius XM, fans have more options and access then ever before. However, much like twenty years ago, old federal laws, many written before the Internet mattered to music, govern how music is played. While music has kept up with the times, the laws have not.

FM Radio doesn’t pay artists at all for music that’s played, and satellite sets rates far below fair market value. To make matters work, U.S. Federal law doesn’t protect songs recorded before 1972, so they don’t get paid at all. Only Internet radio allows rates to be based on fair market value.

These are old laws that need to be updated. Click HERE and add your name to the music FIRST Coalition's campaign working to get Fair play for Fair pay!