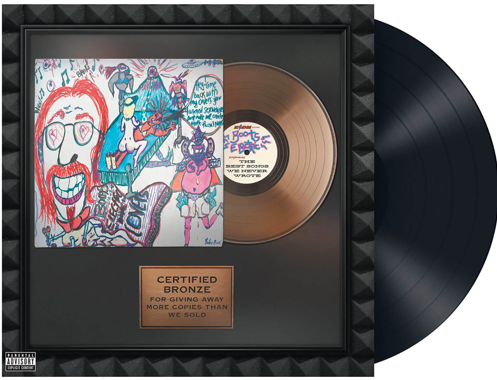 After EODM covered Duran Duran’s “Save a Prayer” on 2015’s ZIPPER DOWN, it got lead singer Jesses Hughes thinking about songs EODM could put their own spin on. Jesse recorded and produced the new album, choosing 13 that have inspired him. The eclectic track-listing includes the songs “God Of Thunder” (KISS), “So Alive” (Love & Rockets), “Abracadabra” (Steve Miller Band) and “Careless Whisper” (Wham) among others. These are very personal interpretations, and “Careless Whisper," in particular, was one Hughes really wanted to tackle. The first track released from the album is a cover of Mary J. Blige’s “Family Affair.”

Eagles of Death Metal Presents Boots Electric Performing the Best Songs We Never Wrote is available on digital, CD, 180-gram black vinyl and limited edition 180-gram red and blue marble swirl. The band is also touring this summer, spending June in Europe, and coming to the States for an August date at the Greek Theatre in Los Angeles. Visit their Section 101 designed and hosted website, https://eaglesofdeathmetal.com, to keep up with the latest on their tour dates, singles and collectibles!