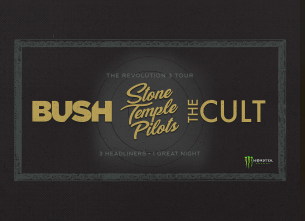 BUSH EMBARK ON THE EVOLUTION 3 TOUR

This summer fans of amazing music are in for a treat as BUSH, Stone Temple Pilots and the Cult unite for a co-headlining tour.

Dubbed the Revolution 3 tour, produced by Live Nation and sponsored by Monster Energy drink, the twenty-date outing kicks off in mid-July in Nashville at the Municipal Auditorium and ends September 2 in Phoenix at the Ak-Chin Pavilion. “We are looking forward to see everybody in the summer,” Bush frontman Gavin Rossdale told Rolling Stone in a statement. “This is a great tour for rock fans.

Section 101 client BUSH will be supporting their Black and White Rainbows album, which came out last year. In their review of the album ALL MUSIC said, “Opting to focus on positivity and the big picture, Black and White Rainbows crafts a collection of adult contemporary hard rock that is fittingly mature and somewhat optimistic. Rainbows features some of the brightest songs in the Bush catalog."

Tickets for the Revolution 3 tour are on sale now at Livenation.com. BUSH fans can add a VIP experience on to their concert ticket via the band’s website at https://bushofficial.com/tour.