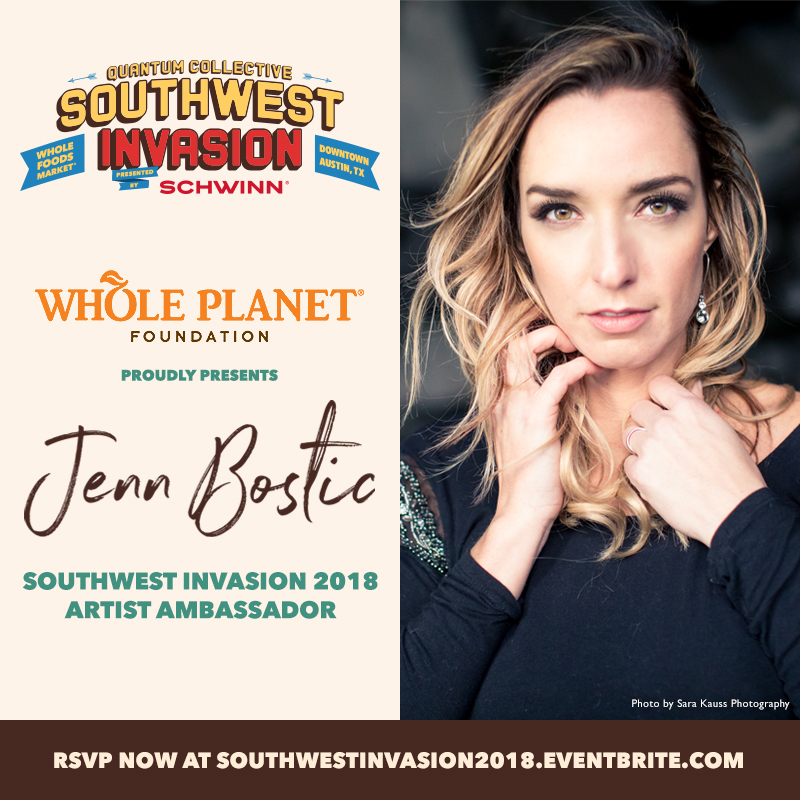 New York, NY (March 2, 2018) --- Whole Foods Market will once again host the just announced 7th annual Southwest Invasion concert series on March 15-17, 2018 in Austin, TX.  The experiential event, free to the public and open to all ages, drew over 15,000 fans last year to the Whole Foods Market flagship store’s rooftop venue and courtyard for shows by emerging and legacy bands as well as interactive opportunities with goods developed by socially responsible brands.

New to this year’s event will be the Southwest Invasion Whole Planet Foundation Artist Ambassador, a role Nashville singer songwriter Jenn Bostic may have been born to play. With her compassion and commitment to helping those less fortunate, Jenn was a natural pick for the first-ever Artist Ambassador.

Said Jenn,“I am super-excited to be working with the Southwest Invasion and Whole Planet Foundation as their first Artist Ambassador. Whole Planet’s mission is to alleviate global poverty in communities around the world that supply Whole Foods Market stores with products and I am thrilled to be able to call attention to their important work.”

Jenn will be involved in all aspects of the event from introducing artist performances at the Southwest Invasion, to doing backstage interviews with musicians, to holding live Q&As on her social media channels. In addition, she is giving 50% of the proceeds from downloads of her song “Faint of Heart,” from her forthcoming album REVIVAL, to Whole Planet Foundation throughout the month of March.

REVIVAL, Bostic’s fourth Album, is produced by six-time Grammy award winner Paul Salveson and was recorded at the House of Blues in Nashville. A pledge music campaign was recently launched to support the release www.pledgemusic.com/jennbostic and she is currently going back and forth between the States and the United Kingdom for a series of shows.  Jenn kicked off her tour on February 21st in Maidstone and will be ending with a concert in Manchester on May 2nd. In between she will be performing in London (twice), Belfast, Glasgow, Birmingham, Newcastle, Southampton and Kent.

Whole Planet Foundation is a private, nonprofit organization established by Whole Foods Market and dedicated Alleviating global poverty through microcredit. You can learn more about this wonderful organization by visiting https://wholeplanetfoundation.org.