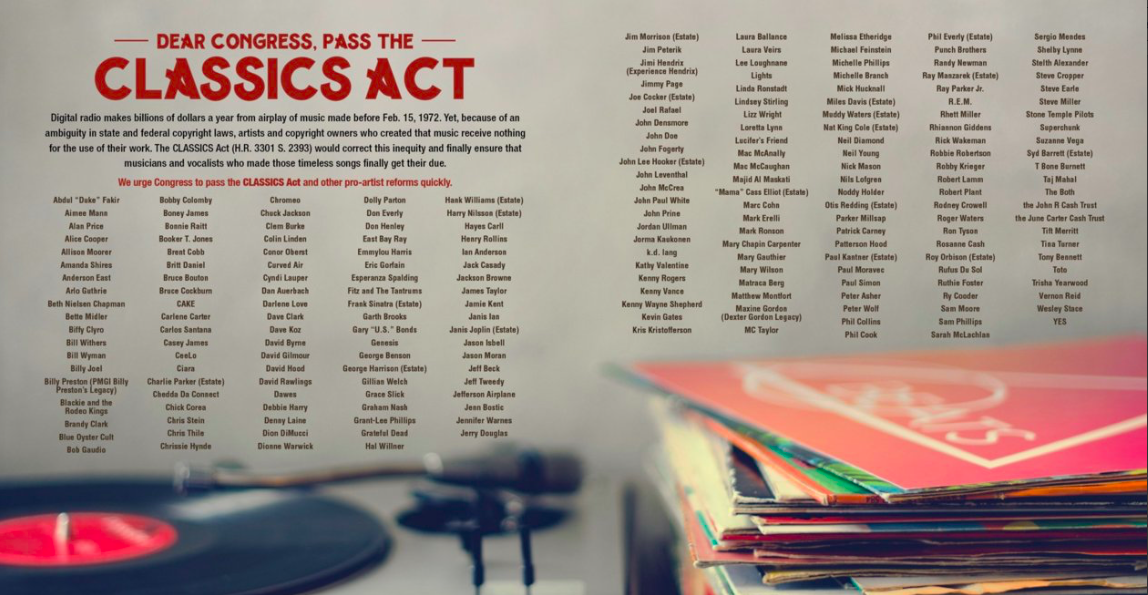 THE CLASSICS BILL ON ARTIST'S RIGHTS

In the next few weeks, The House of Representatives’ Judiciary Committee is expected to vote on a bi-partisan music licensing package.  This is the result of years of hearings, studies and consultations with all sides of the music business. The hope is that 2018 will be the year that creators of music are not only heard but finally treated fairly.

Under discussion is the “CLASSICS Act,” which is a part of the aforementioned package.  The passing of this Act would require digital radio services, like SiriusXM and Pandora, to compensate artists and copyright owners for their use of pre-1972 recordings.  The bill will also allow digital music services to settle disputes with rights holders by paying royalties for the past three years at the current statutory rate. Right now, these services pay to use newer music but not for pre-1972.

In December, the Content Creators Coalition, a non-profit, artist-run, advocacy organization with chapters in L.A., New York, Nashville, Chicago, and San Francisco, urged Congress to pass the CLASSICS Act, with a strong showing of artist support.  The music community plans to run that statement as an ad in one of the Capitol Hill newspapers right before the Committee votes in mid-February.  Other groups have also issued statements in support of the CLASSICS Act.

Artists rights has always been a very important part of what Section 101 stands for and we are working closely with the Content Creators Coalition on this package. You can learn more about the CLASSICS Act, and the Coalition, by visiting their website at https://www.c3action.org.