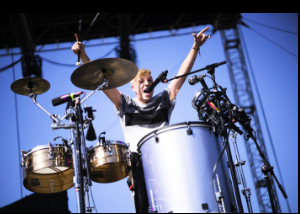 Section 101 client Robert DeLong, a “pop-dance-one-man-band,” is gearing up for a busy summer on the road! Robert is about to take off on the X Ambassadors tour as well as many festival dates that will keep him traveling all summer long.

X Ambassadors, who were part of our Southwest Invasion showcase in 2015, have invited Robert to join them for 6 dates on their current tour, from May 4 at the Fillmore in Detroit through May 14 in Ithaca, NY.  Robert’s also playing the Crystal Coast Music Festival in North Carolina, the FireFly Music Festival in Delaware, the WKQX Piqniq in Illinois, the Pemberton Music Festival and WayHome Music and Arts Festival, both in Canada, and the Vertex Festival in Colorado. Buzzbands.la called his recent Coachella performance “a fun force to be reckoned with.”

Robert’s latest release, IN THE CARDS, came out on September 18, 2015 on Glassnote Records. It is a deeper, more introspective album for him, with Robert sharing with I Heart Radio, “The first track, it kind of came about because I was just really fascinated by the art on tarot cards. I've never been a very supernatural person in any sense, but I was really into ... there's this sort of mythic element to the art, and you look at it, and you think, 'Man, there's a lot of meaning here that you can derive from this.” All Music Guide said “even when he's tackling complex emotions, DeLong never forgets to keep his songs hip-swayingly straightforward and melodically memorable.”

Robert re-skinned his Section 101 website with the launch of IN THE CARDS, making sure his website art matched the packaging of the release.  In addition to information on tours, news, photos and even a video game, DeLong offers fans that sign up for to his mailing list a new song download each month. Make sure to visit https://robertdelong.com so you can follow along with what he’s up to!