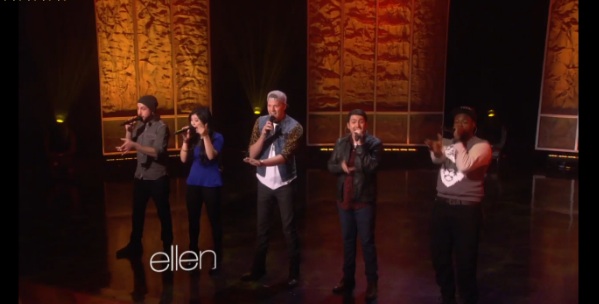 If you spend any time on the Pentatonix website, https://PTXOfficial.com, you may notice two things - the terrific new splash page celebrating their latest release as well as their amazing video “Evolution of Beyonce”, which is such a smash hit that The Hollywood Reporter did an article on the viral sensation AND Beyonce herself posted it to her Facebook page. Another fan of the mashup was Ellen DeGeneres who quickly invited the group to perform on her show on the eve of their upcoming album release.  Pentatonix also won a YouTube Response of the Year Award at the online video channel's first ever award show last night for their video of Imagine Dragons's “Radioactive” with Lindsey Stirling.

Pentatonix Volume 2, which streamed on Billboard last week, is coming out tomorrow, November 5, with a special new video to celebrate the much-anticipated release. The album has 3 original tracks and covers including first single Macklemore and Ryan Lewis’  “Can’t Hold Us.’ If that isn’t enough excitement, many of the group’s shows on their first European tour sold out so quickly that they had to be moved to larger venues.

Section 101 is so proud of all the success Pentatonix is having , it truly couldn’t happen to nicer – or harder working – group of people!