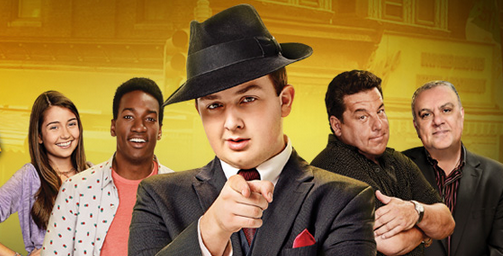 When you’re making your holiday plans, make sure to include a viewing of Nickelodeon’s NICKY DEUCE this Memorial Day Weekend! Based on the book Nicky Deuce: Welcome to the Family by The Sopranos star Steven Schirripa and Charles Fleming, the TV movie, also staring Schirripa, features sixteen-year-old actor Noah Munck as Nicholas Borelli II, a nerdy teen who morphs in to the much cooler “Nicky Deuce.” Spending the summer in Brooklyn with his Uncle (Schirripa), Nicholas mistakenly ends up earning the rep of a tough guy, uncovers some family secrets and learns a lot about growing up.  The film also has several cameos by stars of The Sopranos, including “Tony” himself, James Gandolfini.

After debuting with a micro site, the full site for Nicky Deuce launched TODAY at https://nickydeuce.com. Featuring some never-seen-before behind the scenes photos, on set videos a special photo shoot and online videos with the cast members, the site will get you geared for this fun tween outing airing on Nickelodeon on May 27th at 8pm.

Be sure to check it out at nickydeuce.com!